Since 2014 Blue Hors has every year honoured a breeder for remarkable and successful breeding results with offspring from Blue Hors Stallions. The Blue Hors breeder of the year receives the perpetual trophy that is Blue Hors Don Schufro as a bronze statuette.
3. April 2022Open House 2022 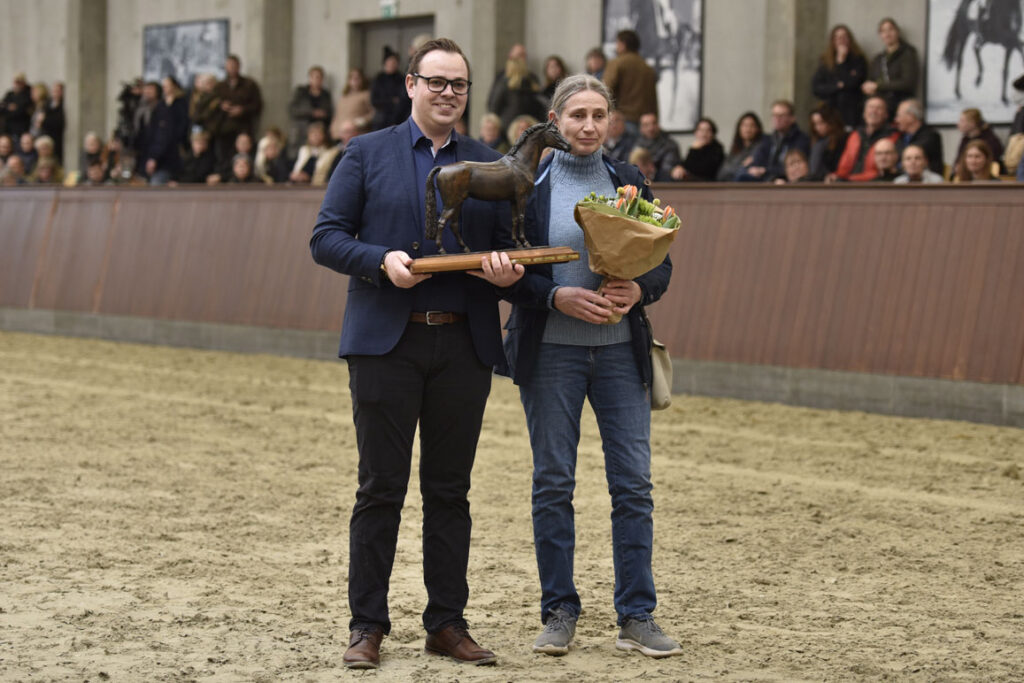 We would like to invite the Breeder of the Year 2022 to a “lap of honor” and therefore Martin is now being driven into the arena in an Audi E-Tron GT, which has been made possible thanks to Audi Fredericia. The car will be driven by Mikkel Overgaard Christensen from Audi and he will after the show be available out front if you want to ask about this or another of the new Audis. This year’s Breeder of the Year is already in here – so now I want to leave the floor to breeding manager Martin Klavsen.

Kirsten B. Hansen runs Stutteri Skoven in Jordrup Skov together with Jens Lund Pedersen. Here they have together bred successful horses like the elite stallion Skovens Rafael, who is by the elite stallion Blue Hors Romanov and with the legendary Blue Hors Don Schufro as damsire and Zorro Z in the third generation.

Skovens Rafael is out of Richard Nielsen’s elite mare Tazorba – and the list of top results for this stallion is very long. Rafael was sold at the Danish Warmblood auction in connection with the stallion selection at a then record price of 1.2 million kroner. He was then a newly named premium stallion, before moving on to a successful career as winner of DRF’s 4-year-old championship, World Breeding Federation’s Young Horse Championship finalist for 5- and 6-year-olds and on again to a successful career as the sire behind, among others, the approved stallions Springbank II and Adrenalin Firfod.

He has been active in Grand Prix dressage, in which he is, among other things, Nordic Champion 2017 and a 3 * Grand Prix winner. In 2019, Skovens Rafael was named Stallion of the Year in Danish Warmblood, just as he has won the Swedish Grand Stallion Prize two years in a row (2014 and 2015). He is very popular in Sweden, where he was also awarded a gold medal in 2021 and named Swedish Elite Stallion.

The Dressage Mare of The Year in Danish Warmblood 2017, Skovens Tzarina by Blue Hors Zack and Blue Hors Don Schufro, also comes from Kirsten and Jens. As a foal, Tzarina was Best Dressage Filly in Danish Warmblood Region 4, just as she was also the best dressage mare later on in her life at the Danish Warmblood Elite Show, where she was awarded a gold medal. Like Rafael, Tzarina has also been successful in the young horse championships and participated in the World Breeding Federation’s Young Horse Championship.

Mares of the highest caliber