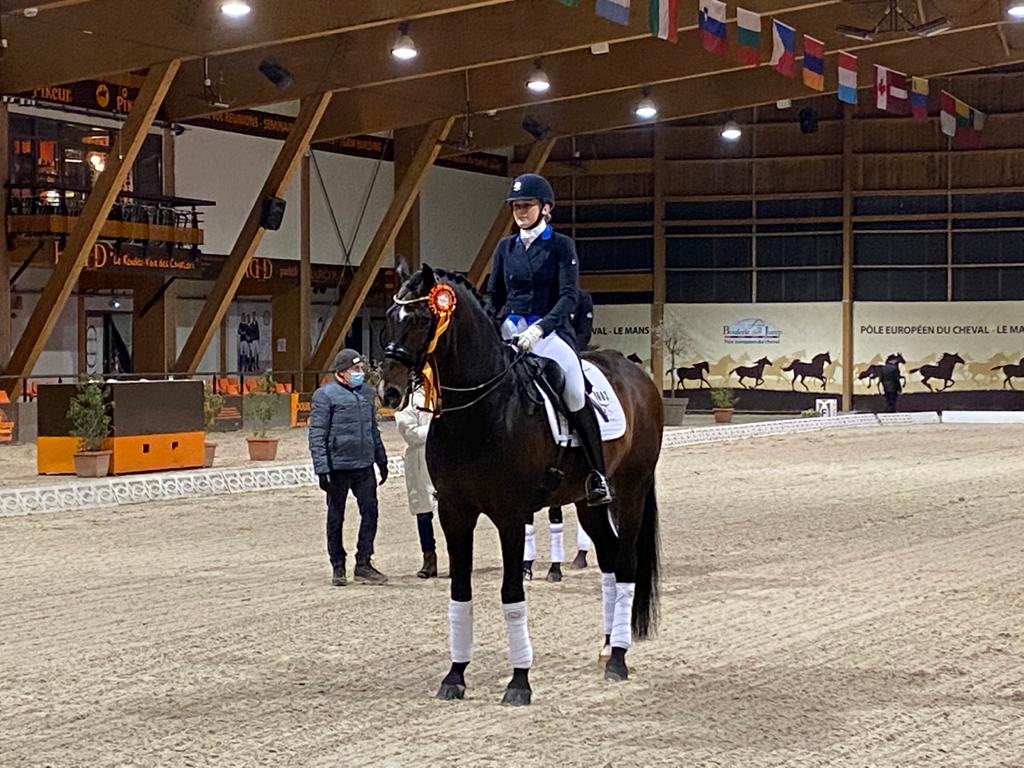 After a 20-hour drive in the Blue Hors truck, Nanna Skodborg Merrald, Gitte Fabrin Hansen, Ellen Glinvad Nielsen and their precious cargo consisting of 4, what in this context might be called Ferraris, Porsches or Lamborghinis, arrived at Le Mans in France at the equestrian center Boulerie Jump, who was acting in the role of host for the up to 3-starred equestrian event.

With a single sleep-over in Belgium during their travels, it was a weather-wise cold welcome that met the team when they installed the 4 horses in their assigned outdoor boxes. But already early Friday morning, the whole team got a little warmth from the win done by Gørklintgård’s Quater Boy (breeder: Jørgen Ravn) by Quarterback / Blue Hors Don Schufro / Leandro.

At 08:30 on Friday morning in Boulerie Jump’s beautiful Grand Hall, Nanna and Quater Boy rode into an impressive first place in CDI2 * Intermediare B with a beautiful 70.540%!

Around noon at 11:28, it was the turn for breeding stallion Blue Hors Farrell (Fürstenball / Dacaprio / Wolkenstein II)! Farrell and Nanna had their start in a CDI2 * Prix St. Georges, – and also this ride must be said to have been extremely successful! With an extremely convincing ride full of quality, capacity and grace, Farrell and Nanna rode into a first place with 72.794% – and with a full 4% down to number 2; Dutch Julia Bouthoorn.

Blue Hors Farrell with Nanna in the saddle and the 2 proud grooms; Ellen & Gitte, by their side

Then it was Friday afternoon and CDI3 * Grand Prix o’clock in the Boulerie Jump Grand Hall.

Nanna’s first start in this class was 15:26 with the breeding stallion Blue Hors St. Schufro after St. Moritz Jr./Blue Hors Don Schufro / Ataturek. St. Schufro showed here, for his only 2nd competition in Grand Prix, a consistently sky-high amount of quality with convincing extended trots, half-passes and an always impressive work in passage. At the same time, the 10-year-old stallion’s program was also affected by minor errors, which pulled the program down to a 67.45%. However, we do not doubt the combination of Nanna and St. Schufro, who in Esbjerg in January 2020 debuted in the Grand Prix with an impressive victory in a very strong field of Danish top names, for a single second.
In the same class, however, Nanna still had a really strong stallion-card to make use of with the experienced gentleman; Blue Hors Zack after Rousseau / Jazz / Belisar. Zack turns 17 this year, but there is really no doubt that he is still fully ready for the task, – and clearly has been looking forward to being the ultimate king of the competitions once again.

Zack, who was previously extremely successful under Daniel Bachmann Andersen, showed together with his new rider Nanna Skodborg Merrald that both parts of the equipage’s constellation possesses a sky-high amount of talent for Grand Prix dressage – and that together they are a match that is worth keeping an eye out for!
With 74.17% in their debut in the Grand Prix together, they put a nice distance of 2% down to the second place and took home the victory! To the delight of both Nanna and an obviously very content Zack.

The success continued on Saturday

This morning, 08:48, Quater Boy and Nanna were ready again!

In Intermediare II it turned into a great 72.58% and yet another first place for the crew!

For today’s Grand Prix Special, Nanna had to choose between St. Schufro and Zack, and here the choice fell on yesterday’s Grand Prix winner Zack, – who Nanna is still getting to know, especially in the competition context! But, even today, Zack was fully ready for the game, where he danced his way through an extremely impressive GPS, where the only finger that was to put on the program was 17 instead of 15 one-tempis. A mistake that was easy to overlook when the quality of the rest of the program was at such a towering top level that Nanna and Zack showed us!

Nanna on Gørklintgård's Quater Boy and Gitte Fabrin Hansen by their side.

Nanna and Zack’s victory was heavily cemented with 74.362% and more than 4% down to the second place! An extremely nice debut by this brand new couple!

With that, Nanna Skodborg Merrald, Ellen Glinvad Nielsen, Gitte Fabrin Hansen, the 3 Blue Horse breeding stallions and the sales horse Quater Boy ended the weekend with a wild 5 out of 5 possible victories!